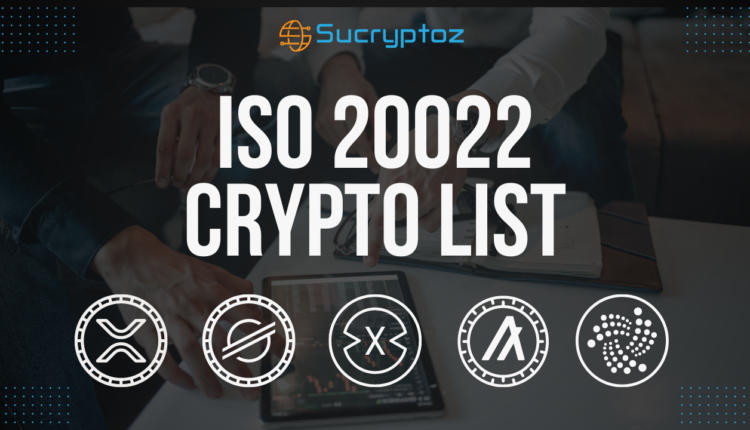 Cryptocurrency has taken the world by storm, with people trading millions of dollars every second. However, the market does not have a single central Governance system and hence has the risk of illicit activity. Various countries have been making attempts to regulate the market indirectly.

So, financial institutions have introduced certain compliance standards to be adhered to, like a common language and model for financial messages across the world.

Today, we will be looking at one such standard: The ISO 20022, and see what are the 5 cryptocurrencies compliant to it.

The International Organization for Standardization, or ISO for short, drafts standards to be followed for several fields. One such standard is the ISO 20022. This standard covers the transmission of financial information.

The ISO 20022 is a fast-growing language for messaging payment information all across the world. It has already been incorporated by the Federal Reserve Board of the USA. It resembles SWIFT, the Society for Worldwide Interbank Financial Telecommunication, but is used for a broader purpose.

The standard matters to us because it oversees transactions against cryptocurrency as well. It removes many of the advantages that cryptocurrencies have in the existing payments model. This may reduce the importance of large cryptocurrencies like Bitcoin as a means of overseas money transfers.

Ripple is a payments system created and managed by RippleLabs Inc. The distributed ledger of the company uses the cryptocurrency XRP. XRP already had partnerships with banks and other financial institutions for overseas payments and settlements before ISO 20022 was introduced.

Ripple claims to be the first blockchain based payments company to join the ISO 20022 standardization committee, which makes it one big step ahead over its competitors.

Related read: 10 Things You Must Know Before Investing In XRP

Stellar Lumens created Stellar, a platform for storing and transferring money digitally. Any financial system in the world can operate on Stellar and transmit its currency. Even the smallest of banks can gain access to funds at an international level.

The cryptocurrency employed by Stellar is called XLM. ISO 20022 has recognized XLM, and Stellar facilitates asset exchanges, micropayments, etc, so with ISO’s authorization it could multiply its user base in the near future.

In addition, XLM is IBM‘s bridge or intermediary currency, which uses Stellar as the platform for its overseas transactions.

It is one of the first coins to announce explicitly that it is compliant with the ISO 20022 standard.

Xinfin has partnered with more than 200 financial institutions in Asia to host their cross border payments, with XDC acting as the bridging currency. Xinfin has also had connections with SWIFT.

Related read: XDC (XinFin Network) Everything You Must Know Before Investing in $XDC

Algorand is the self-proclaimed world’s most decentralized blockchain infrastructure. Algorand aims to power the economic models of the future based on DeFi solutions, while being a sustainable, scalable, and secure blockchain.

From decentralized finance to generative NFT art (and everything in between), all things are supported on the platform. The bridge currency used is ALGO.

Algorand is a member of the Digital Payments Institute which has recognized the importance of the ISO 20022 in standardizing the financial system.

IOTA is a distributed ledger developed by the IOTA Foundation with a cryptocurrency of the same name. It is a free transfer protocol designed for the Internet of Things. In other words, IOTA is a ledger designed to power microtransactions among IoT devices.

According to Dan Simerman, head of financial relations on IOTA Foundation:

“We actually see the IOTA token as the connective tissue between the human economy and the machine economy, creating interoperability between the two.”

Cryptocurrencies are essential for Financial institutions in getting ready for the ISO 20022 adoption, whether that means replacing legacy technology altogether, or the quick implementation of spot solutions to help facilitate translation, validation, routing, sanctions/fraud/AML orchestration, and other microservices.

Do you think other coins will try to adhere to it?

Let us know your views in the comments section down below.

Disclaimer: This article is provided for informational and educational purposes only.

The views expressed in this video are those of the author and do not necessarily reflect any organization’s official policy or position.

Assumptions made within the analysis are not reflective of the position of any entity other than the author.