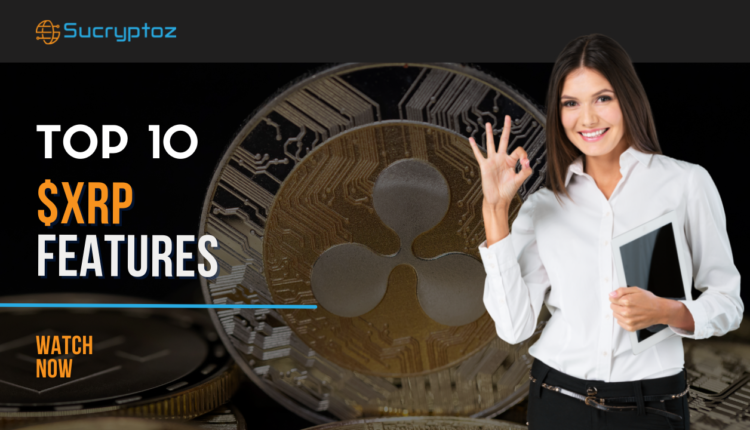 Today, we are going to deep dive into the TOP 10 features of XRP coin and XRP Ledger (XRPL).

According to Brad Garlinghouse, Ripple CEO, 2022 will include a steady drumbeat of new entrants and applications, increased utility and wider adoption around the world for blockchain and cryptocurrency innovations. But one might wonder, how on earth will XRP make part of this blockchain adoption and transform the entire financial system? Is that even possible?

To answer this and several other questions, keep reading the article and we will explain what each XRP feature does, so you will be able to project the increased utility this coin has to offer for the new normal in finance!

XRP is the native cryptocurrency of the XRP Ledger (XRPL), an open-source and decentralized blockchain. XRP is used on the XRPL to pay for reserves and fees. It can be used on the XRPL DEX to trade directly with other currencies and to act as an intermediary currency for trade and payments.

Now, let’s deep dive into the main features of this coin:

The RippleNet is a decentralized global network of banks and payment providers using Ripple’s distributed financial technology, which provides real-time messaging, clearing, and settlement of financial transactions.
RippleNet makes it easier than it’s ever been to run a high-performance payments business.
RippleNet offers connections to hundreds of financial institutions around the world via a single API and makes moving money faster, cheaper and more reliable for you and your customers.

RippleX is hyper-accelerating the Internet of Value by providing the infrastructure, tools, services, programs and support for creation on the XRP Ledger (XRPL). With this support, an open community of developers can advance the solutions and innovation needed to allow businesses, consumers, institutions and governments to fuel the engine of a new digital economy.
RippleX is built on the principle that the success of blockchain in realizing the Internet of Value hinges on how easily new technology works with how the world operates today.
The characteristics of the XRP Ledger and its native digital asset XRP include superior speed, low cost, scalability and sustainability. These allow developers and entrepreneurs to seamlessly transform existing applications and unlock entirely new user experiences across payments, identity, foreign exchange, digital media and many other industries.

Through the On-Demand Liquidity (ODL) service, RippleNet leverages the digital asset XRP as a bridge between two currencies, allowing you to eliminate pre-funding of destination accounts, reduce operational costs and unlock capital.
RippleNet customers can use XRP to bridge two currencies in as little as three seconds, ensuring payments are quickly sent and received in local currency on either side of a transaction.

So, if you have RippleNet and On-Demand Liquidity features, we can conclude XRP is also the perfect coin for cross border payments.
Traditional centralized financial institutions can take days to complete a cross border payment, due to the different systems involved in the process. This can make the current landscape slow, error-prone, costly and can negatively impact the efficiency of a business cash flow.
In conclusion, XRP is ideally suited for global payments because it is fast, cheap, scalable and sustainable.

Related read: The Difference Between Ripple (XRP) And SWIFT For Cross Border Payments

The XRP Ledger contains a fully-functional exchange where users can trade issued currencies for XRP or each other.

In the XRP Ledger, “rippling” describes a process of atomic net settlement between multiple connected parties who have trust lines for the same token.

Rippling is essential, because it allows users who hold tokens to send those to each other with the issuer as a passive intermediary. In a sense, rippling is like a passive, two-way exchange order with no limit and a 1:1 exchange rate for two tokens with the same currency code but different issuers.

On the XRP Ledger you can issue assets, for example you can represent stable coins, CBDCs, stocks, commodities, unique assets like a deed for a house, collectable items, unique parts on a supply chain, etc.
For this feature is worth remember the famous quote of David Schwartz at The North American Bitcoin Conference 2022:

Escrow is a feature of the XRP Ledger that allows you to send conditional XRP payments. These conditional payments, called escrows, set aside XRP and deliver it later when certain conditions are met. Conditions to successfully finish an escrow include time-based unlocks and crypto conditions. Escrows can also be set to expire if not finished in time.
The XRP set aside in an escrow is locked up. No one can use or destroy the XRP until the escrow has been successfully finished or canceled. Before the expiration time, only the intended receiver can get the XRP. After the expiration time, the XRP can only be returned to the sender.
Ripple expects that escrow will increasingly be used for higher-value, on-ledger and cross-ledger atomic payments using the Interledger Protocol. The XRP Ledger also provides payment channels for lower-value, off-ledger payments and micropayments.

The Ripple network does not run with a proof-of-work (PoW) system like bitcoin or a proof-of-stake (PoS) system.
Instead, XRPL uses a consensus protocol, in which designated servers called validators come to an agreement on the order and outcome of XRP transactions every 3-5 seconds.
All servers in the network process each transaction according to the same rules, and any transaction that follows the protocol is confirmed right away. All transactions are public, with strong cryptography to guarantee the integrity of the system.
Anyone can operate a validator; currently, over 150 validators are active on the ledger, operated by universities, exchanges, businesses, and individuals. Additionally, the consensus protocol ensures the blockchain becomes more decentralized over time as the validator pool grows.

Hooks add smart contract functionality to the XRP Ledger: ‘layer one’ custom code to influence the behavior and flow of transactions. Hooks are small, efficient pieces of code being defined on an XRPL account, allowing logic to be executed before and/or after XRPL transactions.
The XRP ledger is known and is being appreciated for its transaction throughput, speed, and low fees. Combined with available advanced transaction types like a multi-sign, escrows, payment channels, and even a decentralized exchange (all on a ledger, out of the box, without requiring smart contracts), the XRPL has a lot to offer businesses and (creative) developers with the addition of Hooks (Smart Contracts).
These hooks can be really simple, like: “reject payments < 10 XRP”, or “for all outgoing payments, send 10% to my savings account,” or more advanced.
By allowing hooks to not only execute efficient logic but also to store small, simple data objects, one could define a hook like: “for incoming payments transactions, check if the sending account is in a list maintained by another hook, and if present: reject the transaction”.
In conclusion, “Hooks” is significantly expanding the use cases of the XRP Ledger!

XRP is the first coin to join the select list of coins compliant of the ISO 20022 standards, which will help it be ready for the arrival of the data rich messaging protocol and financial institutional adoption all over the world.
ISO 20022 is a multi-part International Standard prepared by ISO Technical Committee TC68 Financial Services.
Indeed, investors are bullish on the potential integration of crypto into the global central banking system, and XRP being compliant of ISO 20022 makes it one big step ahead over its competitors.

Based on the discussed information, it looks like Ripple has a great future ahead! It will be able to become a mainstream cryptocurrency that can be considered for use as a global standard.

TOP 5 Reasons To Invest In XRP

Is Singapore becoming less favourable as a crypto haven?