The Difference Between Ripple (XRP) and SWIFT for Cross Border Payments 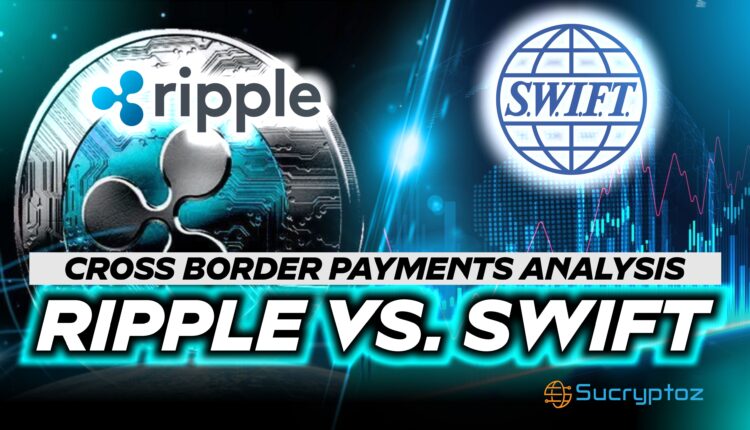 Traditional financial systems are being transformed by blockchain technology. The cross-border money remittance sector is at a crossroads. The old SWIFT system is being challenged by new entrants such as the Ripple system, which is based on blockchain distributed ledger technology and has its own cryptocurrencies.

This video and article does an analysis on both technologies to see whether blockchain technology has the capacity to disrupt a traditional sector and how this may be accomplished.

Despite some small difficulties, we find that Ripple offers all of the advantages over SWIFT. SWIFT will continue to lead the remittance business in the immediate future because of economies of scale and the network established in the actual economic system. However, in the long run, new technologies like RippleNet will transform the remittance sector and potentially other financial institutions.

Since the 1970s, people’s methods of sending money from one nation to another have remained mostly unchanged. Despite the introduction of the internet and new digital technologies, moving money around the world remains difficult: there is no insight into what happens throughout the process, settlements can take several days, and they are generally highly expensive.

Ripple, founded in San Francisco, envisions a world in which value may be sent as fast and inexpensively as information. They have a convincing case: $180 trillion in cross-border payments are made each year, at a cost of more than $1.7 trillion.

SWIFT: How Cross-Border Payments Are Made Today?

The SWIFT system, a financial messaging system that operates on a global network of thousands of institutions, enables banks to share information about financial transactions in a standardized manner. SWIFT, on the other hand, is only a financial information transmission mechanism that instructs one bank to debit one account and credit another; it does not move money.

A connection between banks is required before they may undertake cross-border transactions.
Banks with direct links have accounts opened up with their overseas partner banks.

When a transfer happens, the SWIFT system debits the sending bank’s Nostro account and credits the receiving bank’s local account.

Banks, on the other hand, would need to maintain several pre-funded Nostro accounts throughout the world in order to facilitate transfers to all nations with whom their clients do business. Many nations’ capital requirements for storing idle money would be prohibitively expensive, necessitating the necessity for correspondent banks.

These banks serve as mediators for smaller and medium-sized banks and have alliances with several multinational banks. When a money transfer request is made, the SWIFT system connects banks via correspondent banks and advises each bank along the road which transaction to complete.

Ripple: The difference in use XRP for cross border payments

Speed is important in today’s world. In the traditional, institutional money transfer world, participants globally must interact with each other, essentially figuring out how to work with different systems that may or may not be easily compatible. With RippleNet, Ripple essentially created a global network that broadly abides by a given framework and group of parameters, making interactions among participants simpler, smoother and more transparent, while decreasing costs and transaction times.

Traditional centralized financial institutions can take days to complete transactions, due to the different systems involved in the process. This can make the current landscape slow, error-prone, costly and can negatively impact the efficiency of a business transaction.

Ripple cryptocurrency helps you avoid these issues with the help of RippleNet, which utilizes the On-Demand Liquidity or ODL feature. The ODL feature takes away the need for any type of pre-funding in case of cross-border transactions. Imagine that one individual wants to make a cross-border payment and has a different currency.
For example, the receiving party in Sweden may not agree to receive Canadian dollars. In such cases, you can use Ripple XRP as the middle ground between the two distinct fiat currency types.

Through the On-Demand Liquidity (ODL) service, RippleNet leverages the digital asset XRP as a bridge between two currencies, allowing you to eliminate pre-funding of destination accounts, reduce operational costs and unlock capital.
RippleNet customers can use XRP to bridge two currencies in as little as three seconds, ensuring payments are quickly sent and received in local currency on either side of a transaction.
As Ripple affirms on their website “XRP is ideally suited for global payments because it is quicker, less costly, more scalable and sustainable than any other digital asset.”

Ripple vs. SWIFT: Which one is more trusted?

Some claim that SWIFT is a more trustworthy instrument than Ripple since the technology has been around for longer.

Trust in an institution isn’t enough; we need our own authorization testing, ethical hackers, and third-party testing.
It’s not only a matter of trust. SWIFT is significant since it is used by 11,000 banks. It is part of the global financial system in scale and its political network is very strong.

But this does not imply that it is a superior option because Ripple offers greater visibility and assurance regarding payments. According to Brad Garlinghouse, Ripple CEO they have a few hundreds customers of financial institutions across 55+ countries worldwide.
In addition, RippleNet’s security capabilities are SOC 2 certified. System and Organization Controls 2 (SOC 2) are a set of internal control reports which ensure service organizations have the appropriate processes in place for secure data management and processing.

To conclude, in a rational world, because it is faster and cheaper and no more difficult to implement, I would expect Ripple to grow faster than SWIFT. Logically, regulators should prefer Ripple because near instant transfers vastly reduce liquidity and credit risks.
But we do not live in a rational world, and SWIFT has the benefit of incumbency. Based on existing correspondent banking arrangements, SWIFT may seem less frightening to banks.

According to the document “The Cost-Cutting Case for Banks” published on Ripple’s website:

Ripple presents a compelling long-term value proposition for all financial institutions seeking global reach. As infrastructure technology, Ripple enables banks to transact instantly and directly with any other bank partner around the world, optionally sourcing liquidity from a competitive market of third-party liquidity providers, with end-to-end visibility and confirmation of funds delivery.

Taken together, Ripple and XRP minimize settlement risk and eliminate the need for banks to collateralize nostro accounts around the world, resulting in a lower total cost of settlement than ever before.

The exciting potential of the new technology lies not just in the cost savings banks can extract from the old system but the possibility to enable new models and businesses entirely.

In the world of payments, a technology solution like Ripple and XRP creates unprecedented cost-efficiency. In addition, Ripple/XRP makes use cases like global disbursements, international cash pooling, low-value remittances and even micropayments not just possible but profitable.

It’s these new business models that will catalyze development of the Internet of Value.

Thanks for reading the article, and if you made it this far, I hope you’ve learned something from it.

●▬▬▬▬▬▬▬▬▬▬▬▬▬▬▬▬▬▬●
Disclaimer: This article is provided for informational purposes only. It is not offered or intended to be used as legal, tax, investment, financial, or other advice.

10 Things You Must Know Before Invest In XRP

TOP 5 reasons to invest in XRP

Lack Of Liquidations Could Indicate Another Wave Of Selling