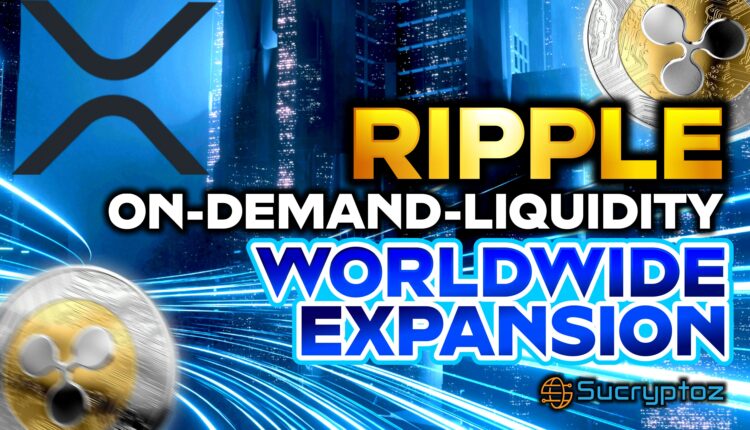 Ripple shook hands with Tranglo to promote on-demand liquidity (ODL) solutions in the United Arab Emirates. Moreover, it joins hands with BRAZIL TRAVELEX and many other Key Partnerships, such as the World Economic Forum, to allow Ripple’s customers to transfer funds across the borders easily.

Cryptocurrency giant Ripple has partnered with global payments company Tranglo to expand Ripple’s On-Demand Liquidity (ODL) solution to the United Arab Emirates (UAE), but just days after shaking hands with Latin American bank Travellex to do the same for Brazil, the company announced the partnership.

The official Twitter account of Tranglo announced this new initiative in a tweet on August 24, 2022. The UAE is the second largest economy in the Arab Gulf region and has one of the largest producers and receivers in the world. In collaboration with Trangro, Ripple wants to handle the vast amount of cross-border payment traffic in the region by popularizing its ODL solution in the UAE.

Ripple’s ODL offers one of the cheapest and fastest cross-border payment solutions. ODL makes use of XRP, allowing users to send funds around the world. The ODL is accessible 24 hours a day, 365 days a year, and does not require advance funding from the receiving market. In addition, in ODL, users can pay the reverse payment for up to 5 days free. You can extend the repayment for a fee.

On August 19, five days before the signing with Tranglo, Ripple signed a new contract with Travelex, a mobile-first Latin American bank, to do the same in Brazil. According to the partnership, Travelex will leverage Ripple’s ODL solution to enable immediate cross-border payments at a fraction of the cost in Brazil.

Ripple’s Native Cryptocurrency XRP has become a powerhouse for ODL payment solutions that allow customers to make payments instantly across borders at a very low cost. This solution eliminates the need for the recipient to raise funds in advance. So, the RippleNet platform leverages blockchain technology and works with a global payment network. It simplifies the settlement process by helping the relevant networks make available immediate liquidity.

In July, Ripple also entered into a partnership with Singapore’s important payment institution, FOMO Pay. Like Tranglo and Travelex, FOMO pay will implement Ripple’s ODL solution to provide affordable and immediate cross-border payment solutions for payment service providers and small and medium-sized businesses in the region.

Ripple is bullish on expansion from the end of 2021, and the coldest winter ever was not a hindrance to Ripple’s efforts. Ripple is not only spreading the ODL protocol across the ocean but also doing a variety of other transactions and looking to acquire other companies.

In November 2021, Ripple decided to support the digital currency construction of the Republic of Palau and took the first step across the border. Palau says it aimed to release the first US dollar government-backed. The country plans to utilize Ripple’s technology without adopting XRP.

In July 2022, Colombia’s National Land Agency announced the adoption of Ripple’s XRPL blockchain for the digitization of land registration systems. The new infrastructure has the ability to register more than 100,000 contracts, which can solve the problem of slow land registration in the country.

Ripple also opened a new base in Toronto in June 2022. The new site is designed to be a technology hub that can drive innovation in the crypto sphere. Upon launch, Ripple said the site would employ 50 developers and expand in the coming years.

Earlier in the winter market, Ripple CEO Brad Garlinghaus revealed that Ripple might be interested in acquiring a new company. A month later, on August 10, a spokesperson for the company said that Ripple would be interested in Celsius, a crypto lender, and would check if it had any potential relevance to Ripple’s business. Celsius is one of the companies that could not withstand the winter market and filed for bankruptcy on 7.14 days.

Ripple is working on a global expansion mission. In its latest attempt, the Crypto payment company has partnered with Brazilian Travelex Bank to launch its first On-Demand Liquidity (ODL) service in Latin America. The integration of the RippleNet ODL service feels appropriate as TRAVELEX is the first and only bank registered with the Central Bank of Brazil and authorized exclusively for foreign exchange operations.

So, this partnership will also help Travelex Bank to simplify access to international money primarily for customers through a simpler remittance payment method. ODL also seeks to provide a better user experience for business partners who cannot afford the cost of pre-funding. The bank is now able to provide immediate settlement and 24-hour liquidity access through RippleNet’s technology.

Ripple acquired a 40% stake in Tranglo in 2021 for the scale-up of Ripple Net and ODL services.
As many news sources say, Dubai is expanding its infrastructure, and the UAE government is fully in favor of setting up a crypto center in Dubai.

Recently, Ripple Technology showed interest in expanding its ecosystem and used cases in the United Arab Emirates and partnered with Tranglo to set up a new payment interface.

Following the September 2021 Test ODL Rollout, which won the first 100 days of 250k trading and a total of $48 million, Tranglo allowed Ripple’s On-Demand Liquidity (ODL) service to all its payment channels in March.

In Q2 2022, Ripple’s On-Demand Liquidity (ODL) using $XRP saw a significant increase in its trading volume. Tokens worth about $408.9 million were sold this fiscal year, with volume growth of 9 times compared to last year.

Token sales in the first quarter were approximately $273.27 million.

According to WEF, the Silicon Valley giant is also working on the parity and effectiveness of money. After Ripple’s CEO Brad Garlinghaus appeared on the WEF2022 panel in Davos, Switzerland, the blockchain company was widely expected to enter into partnership with the World Economic Forum. During the conference, Mr. Garlinghouse lectured on several issues, including the current state of cryptocurrency law in the United States.

The partnership between Ripple and the World Economic Forum is not surprising. Ripple has become known for its state-of-the-art payment systems in the international financial system. For this solution, many banks and other financial institutions are partnering with Ripple and using this technology to make immediate payments across borders.

Many companies, including Tranglo, SBI (NS: SBI) Asia, FINCI, National Bank of Australia (NAB), and Canadian Imperial Bank of Commerce (CIBC), are using Ripple for international payments. Ripple is looking to Tranglo to dominate the payments market in Southeast Asia and aims to achieve the same in Eastern Europe by exploiting its relationship with FINCI.

In 2015, Ripple Lab was recognized by the World Economic Forum as a technology pioneer for its efforts in distributed ledger technology, and it became a big topic of conversation.

Ripple is a technology company partnering with many different organizations to provide a better way to make international payments. One of its recent partnerships is with Tranglo, which will help expand its payment services in Southeast Asia. Ripple is also partnered with the World Economic Forum and has been working with them for years to improve the international financial system.

So, it can be said that Ripple has been gaining popularity and has been able to make a name for itself in the crypto world. The company has been able to form partnerships with some big names and organizations previously mentioned, which will help it in furthering its reach and adoption. Ripple is definitely on the rise and is here to stay.

Moreover, we can say that the partnerships of Ripple (XRP) are very important and constantly growing in number and importance. These partnerships are essential for the development of the company and its technology, as they allow it to reach new markets and users.

Ripple is a company that is constantly evolving and expanding, and these partnerships are proof of this. So, in this regard, we can say that Ripple is definitely a company to watch out for in the future.

XRP (Ripple) 10 Things You Must Know Before Invest In XRP