Money is an Illusion: The TRUTH About Wealth 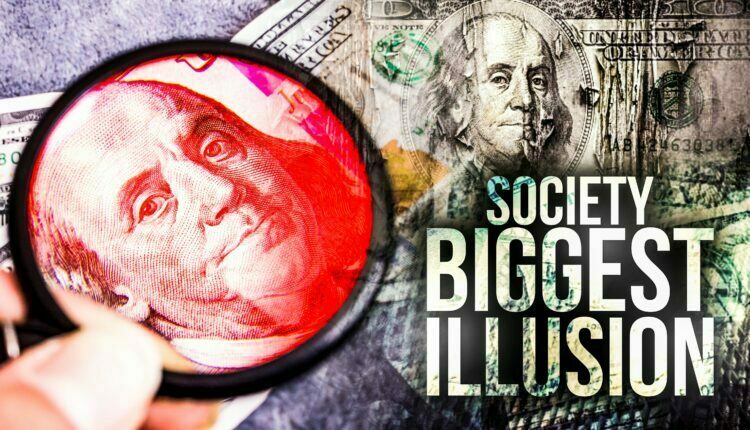 Money is an Illusion: The TRUTH About Wealth

You must’ve heard that famous statement that money is an illusion. But what does it mean? I mean, money certainly exists and is an important part of our lives, right?

Yes, money does exist. But the way we view it is what is an illusion. Money has no intrinsic value. The power lies in how much people believe it to be worth, which differs according to cultural beliefs and economic conditions. It’s a symbolic representation of power, control, and status. It’s a representation of economic power that has become so ingrained in our culture that it seems real.

Money is an Illusion: A Practice Example

Now imagine you have a hundred dollars in your pocket. That money is just paper, with numbers and symbols on it representing the value of one hundred US dollars. But what happens if you take that hundred-dollar bill and exchange it for silver coins? What has changed besides the form of money?

The answer is nothing! The hundred dollars you had in your pocket are still worth the same amount of goods and services, the same amount of resources, and the same value as the silver coins. They just look different. Money is an illusion because it’s just a representation of the real value of something, not the actual thing itself.

This is an important concept to understand because it means that the value of money isn’t really set in stone. Instead, it’s constantly changing based on supply and demand, inflation, and other economic factors.

The Illusion of FIAT Money

The money we use now is called fiat currency. This means that its value is determined by the government and central banks, not by any intrinsic value it has. So, money is worth what we say it’s worth, and it’s always changing.

Historically, many countries have used different forms of currency, such as gold, silver, and shells. These forms of money were often more stable than fiat currency because a tangible asset backed them. In other words, they had an intrinsic value independent of any government or economy.

However, today’s global economy is so intertwined that it would be nearly impossible to go back to a gold-backed currency without blockchain technology been involved. That’s why money is an illusion and why it’s essential to understand how it works. Money is valuable because we assign a value to it, which can change over time.

There was a time when money was just a means of exchange, a barter system. What do you think was that system better than today’s currency system? Maybe it’s a tie since both methods have their advantages and disadvantages. The main difference is that today’s money is more convenient and universal than bartering because it allows us to make transactions quickly and easily without worrying about trading goods or services.

In fact, the top 1%’s greatest secret is that all money is only an illusion and that there is enough fiat currency.

Even if fiat money may be made out of out of nothing, the value of real money must always decrease whenever new money is introduced into a system. To put it simply, that’s how supply and demand work. If demand stays the same and supply increases, the value decreases.

As a general rule, the new currency devalues the old. As time goes on, the value of one’s legacy currency declines. Its buying power is dwindling, implying that they steal worth from your assets whenever they add money to the system.

This causes our standard of living costs to rise gradually.

Consequently, saving money isn’t the answer to a comfortable financial future. Instead, the purpose of raising capital is to buy things—properties whose worth increases over time as a result of the abundance of newly produced currency.

We live in a world where money is an illusion. This means that it’s essential to understand the principles of economics and to make sure you invest your money in assets that will appreciate over time, regardless of inflation. Only then can you create a secure financial future for yourself and your family.

For example, investing in real estate, stocks, commodities, bitcoin, and cryptocurrencies can help maintain the value of your money. The point is to make sure you are investing your money wisely with a Dollar Cost Averaging strategy so it can grow over time and keep up with inflation.

To give an idea of a secure financial future, consider investing in long-term property investments that appreciate value. This way, you are ensuring your money will maintain its value and eventually increase.

One of my classmates invested in a low-cost apartment many years ago, and now it’s worth twice what he paid for due to inflation. As a result, he was able to make a considerable return on his initial investment and, as a result of his long-term planning, will have financial security for the rest of his life.

Just like time is an illusion since it’s impossible to freeze it, money is an illusion because printing more currency can manipulate its value. They are both dependent on our perception. If each of us reading this article had to give our own definition of money, we would all have different opinions.

Some people think that money is a resource, others think it’s a tool of convenience, and others see it as an asset.

But these interpretations all come down to one thing: money is an illusion. It’s an idea that we have all agreed on and accepted.

Understanding the Concepts Behind Money

When it comes down to it, money is a concept that we use to help us achieve our goals and make our lives easier. However, it’s up to us to decide what we do with it. We make the decisions that influence our financial future, and we must keep our eyes open and stay informed about the world of finance.

By understanding the concepts behind money, investing in assets that we appreciate, and being conscious of our spending habits, we can all make sure that our money works for us and not against us. This way, we take control of our financial future and create a secure, prosperous life for ourselves and our families. Money may be an illusion, but it’s one that we can use to our benefit.

So, remember: money is an illusion, but it doesn’t have to be a negative one. Knowing that it’s an illusion can help you be smarter with your money and make more informed decisions about how to use it. So, the next time you’re tempted to think that money is the root of all evil, remember that it’s nothing more than an illusion. And use your newfound knowledge to make the most of your money.

Let’s conclude this article with a saying of the book Wealth for All: Living a Life of Success at the Edge of Your Ability by Idowu Koyenikan:

“The money you make is the symbol of value you create.”

So, what do you think about Money? Is it an Illusion?

Kindly let me know what you think in the comments section below.

The US Dollar Collapse Is Happening Now! A Post Dollar World Is Coming!

How To Become Hyperinflation Proof

How To Invest In Cryptocurrency: Start Here! (Beginner’s Guide)