Crypto Glossary for Beginners and Veterans A to Z – Sucryptoz Academy 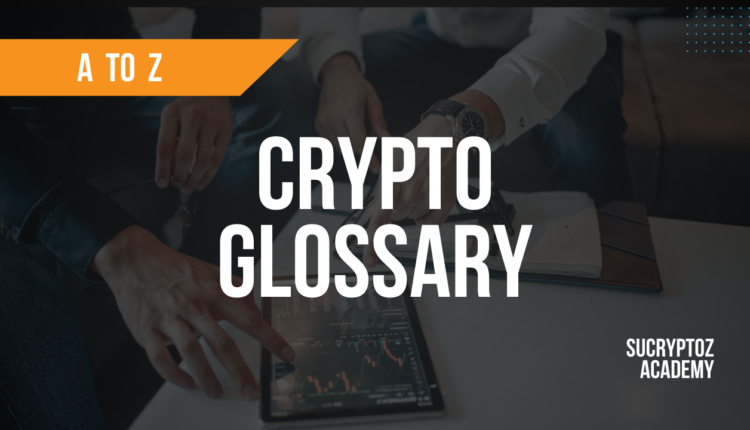 Crypto Glossary for Beginners and Veterans A to Z – Sucryptoz Academy

Crypto Glossary for Beginners and Veterans that love cryptocurrencies and want to improve their crypto vocabulary to make a ton of money from this space, there are a few things that you need to know before you invest in these coins.

Crypto Glossary: From A to Z, let’s walk you through all of the terminologies that you need to know!

Whenever a coin is transferred from one peer to another, the bitcoin miners are rewarded with a single block. So the prior coin is automatically attached with millions and millions of other blocks, being end -to-end tightly encrypted.

Blockchain is a form of distributed ledger technology (DLT), which is automatically attached to millions and millions of other blocks and collects the entire history of transactions. The cryptocurrencies are laid under the basement of a never-ending end-to-end encrypted chain of blocks, the blockchain. So a hacker can hack a single block, but it can never hack a set of millions of blocks, chained together, end to end tightly encrypted.

The process of verification and proof that a particular transaction has been testified, is known as block confirmation. The procedure which is involved here is called mining, taking place in a pool of work systems.

A digitally coded monetary unit, which acts as a medium of exchange, just like our cash but in the virtual world is known as Cryptocurrency. These are stored electronically inside the blockchain, which is end-to-end encrypted to prevent getting hacked and to ease the control of financial matters using cryptocurrencies. Hence each transaction can be traced whenever required.

According to Ethereum.org DAO’s are an effective and safe way to work with like-minded folks around the globe.

Think of them like an internet-native business that’s collectively owned and managed by its members. They have built-in treasuries that no one has the authority to access without the approval of the group. Decisions are governed by proposals and voting to ensure everyone in the organization has a voice.

There’s no CEO who can authorize spending based on their own whims and no chance of a dodgy CFO manipulating the books. Everything is out in the open and the rules around spending are baked into the DAO via its code.

This cryptocurrency offers monetary aids without the anticipation of any mediums such as exchanges, brokerages, or any kind of bank. This could be done by using a process of smart contracts, on a blockchain. It allows investors to borrow or lend virtual funds, trade using cryptocurrencies, earn interest in saving accounts just like banks offer, and also can be insured against risks!

Double spend is the process, specifically in the bitcoin network, when someone tries to compensate a particular transaction to two different receivers, at the same time. As we know, a digital token consists of a set of unique codes that can be easily duplicated, hence transaction history should always be kept in check.

Smart contracts, non fungible tokens, and even other cryptocurrencies trade on top of Ethereum, making its native currency, Ether (ETH), one of the best cryptocurrencies to buy. Ethereum is a decentralized blockchain platform that establishes a peer-to-peer network that securely executes and verifies application code, called smart contracts. Smart contracts allow participants to transact with each other without a trusted central authority.

Fiat money is more like an inconvertible paper money made legal tender with the help of a government decree or fiat.

A fork is said to happen when a community alters any blockchain protocol or mandatory set of rules. After this happens, the old chain splits, producing a new secondary blockchain that shares all of the histories of the old one but is headed off in a new direction. It is of two types- hard fork and soft fork, depending upon the creation of a new coin.

“Fear of missing out” was a major reason behind the rise of bitcoin, which basically means following what others do, so that one doesn’t miss out on the success. It is a sign that the cryptocurrency market holds huge potential in quickly gaining momentum, at any time.

It means fear, uncertainty, and doubt (FUD). It refers to a common mindset filled with negativity or pessimism about a particular scheme, asset or market.

Almost all cryptocurrencies, including Bitcoin, are subjected to a restricting supply, making them a scanty digital aspect. For example, as far as bitcoin is considered, the total amount of this token that will ever be issued is 21 million which is fixed. Hence, to cater to this, the number of bitcoins generated per block is habitually decreased by 50% quarterly. This process is called halving.

A hash is an abstract for “cryptographic hash,” which is the output obtained after a set of data is processed through an algorithm. Irrespective of the length of the input, the hash is a fixed-length set of numbers that is impossible to be decompiled, to seek the original data. This feature highly contributes to the security of cryptocurrencies and thus prevents tampering to a great extent.

This is used by businesses to raise their capital by selling a new cryptocurrency in advance, through digital tokens, in exchange for beforehand capital.

A mandatory procedure in most of the online transaction enabled platforms, where a business is obligatory to verify the background information (address and financials mostly) of their customers, for proper identification proofs.

When a user borrows an amount , the default formula to calculate the loan amount or required Collateral is based on: LTV = (Loan Amount) ÷ (Market Value of Collateral), hence it is the ratio of the loan value of one’s collateral.

Metaverse
The metaverse can be defined as a simulated digital environment that uses augmented reality (AR), virtual reality (VR), and blockchain, along with concepts from social media, to create spaces for rich user interaction mimicking the real world.
The users can even unlock their virtual avatars, unique from others.

A miner is the one who solves a cryptographic problem to earn any specific cryptocurrency without actually putting any money into it. Hence, mining is the process by which the transactions are verified and added to a blockchain. Once the problem has been solved, it is considered “verified”.

NFT stands for non-fungible token. It is more like your own position which you can’t touch or hold, but can rightfully possess it. Using these, nowadays people are extremely into buying and selling art pieces, music and precious items using their NFTs.

Peer-to-peer (P2P) is a way by which people can privately exchange cryptocurrencies without the involvement of any intermediate medium. This process is similar to transferring funds through a bank, but by creating a decentralized network.

The NFTs facilitate the concept of play to earn in Blockchain-based Games. These Games can utilise NFTs to build assets included inside the game, having real-world value. Gamers who earn these NFTs through their progress in games, can later exchange them out for real money.

It is a token or a currency that is privately published by an individual or a business firm. Due to this reason, this token is restricted to be used within that individual network or the particular firm only.

Proof of stake (“PoS”) is an inbuilt consensus, mainly used by the validators or a network of cryptocurrencies. This process is used to verify transactions, by depositing a certain amount known as a stake to unfold their rights to validate the transaction. Hence, the longer crypto is locked in, the greater is the validator’s resistance in the community.

A private key is more like an alphanumeric set of numbers, that responds to a particular wallet or public address, linked via KYC.
Hence, private keys can be considered as the passwords to avail one’s virtual bank account.

Unlike private blockchains, a public blockchain offers an open network globally accessible, where anyone can initiate or receive transactions. They can even execute consensus protocol and maintain the shared ledger along with determining which blockchain they’d want to add their digital tokens into.

Similar to a private key, a public key is an elongated unique code, linked to respective wallets. This procedure acts just like a bank account number. The public code is hashed, and shortened to create a unique address a user is assigned with, while transacting. The coupled security of public on top of private key is what makes crypto networks extremely secure.

Smart contracts are nothing but similar to real-world contracts, which enforces certain predecessor output in response to certain inputs. They are also used to automatically finish the execution of an agreement, so that participants can be directly provided with an immediate output without any mediator involved. Thus, ultimately avoiding third-party verification, lowering fraud risks.

It is a variety of cryptocurrency, which has its value restrained to an outside permanent asset, such as the real world currencies or gold.

The definite set of data that is strictly required by a blockchain network to control and reflect relevant data to be applied by the user, on the chain currently.

It is an instance of blockchain used for testing and experimentation of newer softwares without any risk to the actual and real funds or the main chain.

A token is a virtual currency which represents a tradable asset residing on a blockchain. It allows the user to utilise it for investment or economic purposes. These are enabled to be transferable, and are digitally scarce.

Tokenomics, the combination of token and economics, refers to a crypto asset’s qualities that make it appealing to both users and investors. It refers to all aspects of a token’s creation and management including its supply, allocation, and distribution.It includes everything about the mechanics of how the asset works, as well as the psychological or behavioral forces that could affect its value long term.

An appointment location used to store digital assets (cryptocurrency) is called a wallet. it has an address for sending and receiving funds, thus securely reflecting one’s digital funding status. The wallet either be online or offline, just like a real wallet we keep in our pockets.

Web3 is the name some technologists have given to the idea of a new kind of internet service that is built using decentralized blockchains — the shared ledger systems used by cryptocurrencies like Bitcoin and Ether. The term has been around for years, but it has come into vogue in the past year or so.

All of our videos are strictly personal opinions.

Please make sure to do your own research.

Our videos ARE NOT financial advice.

Introduction To Bitcoin: Frequently Asked Questions And What You Need To Know – Sucryptoz Academy

History Of Money (From Barter To Cryptocurrencies, And The Future Of Money) – Sucryptoz Academy