BlackRock: The Company that Owns The World entered into the Crypto Market 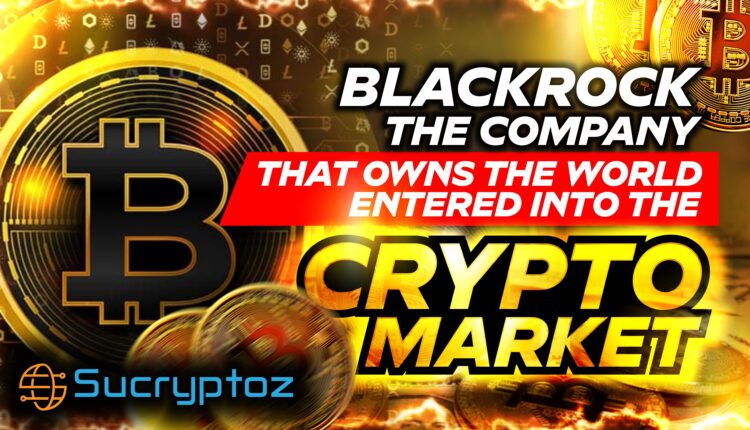 BlackRock: The Company that Owns The World entered into the Crypto Market

Blackrock is known for a plethora of achievements; while some describe BlackRock as the most prominent asset management institution in the world, most of us like to describe it as the company that “owns the world”. Yes, you heard that right! But you would be blown away if I say BlackRock entered into the Crypto Market?

So, are you interested in diving deep into this? We sure would! Whenever you research the stake and ownership of a well-known company, there is a massive possibility that Blackrock is already in it either as an investor or stakeholder in that company.

But how did the company become what it is today, and how did it manage to become one of the most substantial companies in the world?

Let’s take a closer look into it, shall we?

They hold shares of some of the biggest companies in every sector. You name it, from oil and energy to the food industry, and they own it.

To understand how BlackRock became the force it is today, and we have to look at how it started and how the founders’ expertise molded it into a giant. Long before BlackRock was founded, Larry Fink, the mastermind behind Blackrock, worked for the first Boston Corporation. And from a very early time, he was called and tagged as a man who wanted more than what he could have, and this hunger for his financial expertise made him such a great genius.

While working at the first Boston Corporation, he made a billion dollars for the company all by himself and became the talk of wall street. And just like how every successful man fails at least once in their life, Larry suffers through that phase where he was responsible for a 100 million loss that occurred directly to the company, and suddenly he was seen as a liability on Wall Street which no one wanted to be a part of.

This didn’t go well with Larry, and he used this as a blessing in disguise to never fail in his life. Eventually, Larry was kicked out of the company, working so hard to make it what it was, just like Steve jobs. After this embarrassment, he went to establish Blackstone in 1988 with the help of Steven Schwartzman. The company had $5 million credited money, and by the next 5 years, their revenue grew by a huge percentage, and they now have 20 billion dollars under their management.

But both fink and Schwartzman had to go their separate ways after the power dynamic got toxic and didn’t work out the way they expected. And Blackstone became BlackRock in 1993. And from then on, he put his blood, sweat, and tears into growing the company at a massive scale. By 1999 he took the company public, and by 2004 he merged with Merrill Lynch, which added $500 billion worth of assets; as we can see, BlackRock is growing at a swift pace. What makes them a global superpower is their asset managing supercomputer Aladdin.

Aladdin is a network of about 5 thousand computers that store and analyze the data of their clients on a daily basis. And today, some of the biggest corporate entities in the world rely on Aladdin to manage and grow their companies. The thing which separates BlackRock is they use and research through every aspect from banks, pension funding companies, and other organizations from all over the globe. Blackrock gets access from all these institutions and uses it correctly so that their clients are always taken care of and given the best statistical business advice.

Financial Crisis and the power of BlackRock

To understand the power of BlackRock, we have to look at every financial crisis in the 21st century. Out of all the crashes, 2008 and the covid crisis in 2020 were the ones that shook up the world. At the same time, most of the corporate giants looked like they were hit by a which seemed very hard to overcome.

Blackrock was the only organization that stood up on its toes instantly without any hesitation, and these were the times when Larry King became one of the most influential figures in the world. When wall street was going through a messy period, they needed some government help to sort and clean their mess up, and they came knocking on the BlackRock’s door to help them do this immeasurable task.

And just like that, BlackRock became the main point of intersection between Washington D.C and Wall Street. They started working with the government by offering their help in cleaning up the mess created by the central banks and helping get rid of their toxic assets. And this made Larry fink one of the strongest and most famous guys on wall street again.

And to this point, it can be said that it was a long road of redemption for Larry fink. But this time, nothing stopped him, and he still had the same hunger and ambition to conquer the world he had carried for more than 30 years. And in the coming years, the assets under BlackRock kept on growing at an astonishing pace, and this time it was not just in the count of billions but trillions; you heard that, right? Trillions. And when the covid crisis hit the United States, Washington dc came knocking on BlackRock’s door again, and without any hesitation, BlackRock helped the government to clean up the mess and bailed out many companies in which they had a stake in.

And right now, it is estimated that BlackRock owns about half of the major companies in the world, establishing a monopoly in the market. If we take tech giants as an example, BlackRock holds some stake in some of these companies, which are going against each other.

Right now, they have a stake in almost all the top 10 tech companies, from Google to Microsoft, BlackRock managed to get a hold of the world’s best companies and make sure that they never run out of business. While it is hard to believe that larry fink managed to do this all in a span of 34 years, we have to say that that $100 million loss was something that made him the man he is today. To clarify, they also own a stake in the vanguard and .co, their closest rival in the business. That’s how big and dominant the company is in its expertise.

They not only hold this monopoly in the tech business but also in the food, beverage and media industries. Even though fox news and other news organizations like CNBC are polar opposites, they are still owned by the same organization. This is the same pattern in the food industry, there are basically 10 or more companies that own the food supply of the market, and BlackRock, in turn, owns these companies.

Blackrock has been known for holding stakes in many oil companies which emit vast amounts of pollution. So, the organization promises to make its investments more sustainable and environmentally friendly in the future. The company has also sent some letters and notices to start using more sustainable practices in their business, or they might not get the financial support they are used to. This is why many companies are pushing towards sustainable ways of business in such a short time.

BlackRock entered into the Crypto Market

Lately, BlackRock has also entered into the cryptocurrency business with their collaboration with Coinbase. Coinbase’s stock went up 15% after this news broke, and this is said to be one of the smartest and safest moves the company has made. Black rock users can now use its Alladin investment management system to manage and oversee their investment in Bitcoin and other assets such as stocks and bonds.

Blackrock also said that their focus and interest in this partnership with coinbase is because of Bitcoin. It doesn’t matter which sector or market is new to the business; Blackrock will always be there to silently buy the companies, maintain their neutrality in those markets, and let the companies have healthy competition. And through time, if they see growth in the companies, they already have a stake in, they will decide to buy more of those shares to encourage them and give them strong financial support.

After the Coinbase Deal, BlackRock has taken yet another step that sees the asset manager immerse itself in the crypto space. BlackRock has launched a spot Bitcoin private trust that will allow their institutional investors invest in Bitcoin with the condition: “performance of Bitcoin, less expenses, and liabilities of the trust.”
In addition to bringing clients access to the crypto market, the asset manager noted that it was studying four areas of digital assets and their associated ecosystems. These are permissioned blockchains, stablecoins, crypto assets, and tokenization. The company sees potential in these areas that could benefit its clients and the wider capital markets.

BlackRock is one of the world’s most powerful and influential companies, with some kind of monopoly in many industries. The company has a strong history of bailouts and helping to clean up messes and is currently focusing on sustainable and environmentally friendly practices.

Recently, BlackRock has entered into the cryptocurrency business, partnering with Coinbase and plans to launch new services supported by Bitcoin or cryptocurrencies in the near future.

So, it is estimated that the company and the crypto market will keep on growing in trillions in the coming years. This just goes on to show that if there was ever a war, the real winner would always be BlackRock.

This is only my opinion based on my research, and you should do your own research before making any investment decisions.
The views expressed in this video are those of the author and do not necessarily reflect any organization’s official policy or position.

Assumptions made within the analysis are not reflective of the position of any entity other than the author.